No Background Checks for this Chair by Tony Anegon

I was a tennis player decades before I even considered becoming an official.  In fact, in the 1970s, when I was playing both junior and men’s open events, officials were rarely if ever seen on court.   My first close up experience with a chair umpire in 1975 was in a very unusual place:  Southern Michigan Prison in Jackson, Michigan.  No, I was not there as an inmate.  I was asked to go with a group of 8 players from Saginaw, Michigan to play a team of inmates.  I was 18 and the youngest person in the group by several  years.

I have many vivid memories about this day at the prison in the summer of 1975.  Southern Michigan Prison, which is now closed, had a huge prison yard inside the walls, approximately 60 acres with ball fields and 2 concrete tennis courts.  Security was much looser than it is today at penal institutions.  When we arrived, we were led to a grubby anteroom and the only thing we were told was that if you brought cigarettes or gum, the packages had to be unopened.  That was it! Our names were checked off on some list, and everyone had an X painted on the back of their hand with some kind of  paint that was only visible under ultraviolet light so we could be distinguished from the inmates when we left.  I worried about the paint coming off the entire time I was inside the walls.  We were led to a door that opened to the prison yard and we were on our own- the yard was full of hundreds of inmates standing and sitting in groups on the ground as it was a very nice summer day.  I stayed very close to my group as we walked to the courts which were a short distance away.  I was nervous to put it mildly.  As we walked across the yard to the courts, inmates were yelling “Buster, hey Buster”.  It wasn’t until we were done that I was told what that was about.  I also remember my sometimes doubles partner Fred Stark and I were both wearing pastel yellow tennis shorts that were popular at the time.  While walking to the courts, an inmate yelled out “I’ll take the one in the yellow shorts” followed by laughter.  Not something I needed to hear right before playing tennis.

When we arrived at the courts, we were greeted by the prison team who were very friendly and cordial.  They clearly were happy to see people from the outside.  One of the courts had an umpire chair.  There was no prior discussion at least with me as to who was playing who but it was clear that I had been asked to come to play the number one inmate player, the strategy or theory apparently being that I should win, but if I didn’t, well, I was just a kid.  I was introduced to my opponent, the best player in the prison, who immediately informed me that he was doing time for voluntary manslaughter.  This was information I really did not need right before playing, but the inmates would tell you why they were in prison so you did not have to ask.  I don’t remember a coin flip by the chair umpire, who was doing time for second degree murder, but he did say he would be calling all lines.

When the match started, I was as nervous as I can ever remember being on a tennis court.  There were a few non-tennis playing inmates watching, but not many.   Surprisingly, I played very well under the circumstances.  My opponent had good ground strokes but clearly had not played much against my serve and volley, chip and charge style that was suited to the fast hard courts that I played on at the time.  The chair umpire, who actually did a creditable job of keeping and announcing the score, did not call the lines very well.  I was having to return a number of balls that were obviously out and he was calling out balls I hit that were clearly in.  Needless to say, I did not question a call.  I did not say anything or even glance up to the chair when I got a bad call.  I was what all chair umpires want:  players who just play and do not complain.  However, my silence was because of fear and the surroundings.

Despite all of the bad line calls, I won fairly easily, 6-2, 6-1.  As I somewhat nervously shook my opponent’s hand, he was very complimentary and told me he also had gotten a lot of bad calls on his side of the net.  I remember feeling just a little better after he told me that. 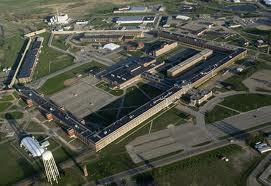 After I played, I stayed very close to the courts watching the others play, afraid to go anywhere although amazingly, we were free to roam the prison yard if we wanted.  The tennis playing psychiatrist in our group did just that and walked all over.  Inmates would come up to us and start conversations, but always friendly and just wanting to talk to people from the outside.  I think I played a set or two of doubles but the details I do not remember.

Our group continued to play until a siren went off and all of the inmates in the yard had to go back to their cells.  We walked towards the same door as the inmates, with the inmates going through the door and to the left with us going to the right.  We all put our hands under an ultraviolet light so the guard could see the X painted on our hands and we were free again.   I can remember a member of a baseball team who was also playing a prison team saying he was glad he didn’t have to live here.  The understatement of the entire day.

When we were leaving the yard, inmates again starting yelling “Buster”.  This time I figured out it was directed at Bob, who was in our group.  After we got out of there, I asked someone what that was about.  It turned out that Bob had organized our prison outing as he had done time there for armed robbery and was on parole. “Buster” was his nickname in prison.  This was news to me and again information I probably didn’t need to know as I hit balls with Bob from time to time.

I don’t know what I learned that summer day in Jackson, Michigan in 1975, but I do know that it is unlikely that I will play tennis in a prison with a convicted felon as a chair umpire again.

This entry was posted in Entertainment. Bookmark the permalink.